Earlier this month I launched Cinetrii which connects movies based on references by critics. The goal was to infer the artistic influences at work for a given movie. Of course, there are multiple biases at play here. I’ve already covered the unequal distribution of available reviews in my original blog post. Furthermore, art is only as interesting as the conversation around it, and not all movies warrant fine-grained reflection. Even for those movies that do, the connections are mostly speculative. Critics are not clairvoyant, they can’t know what directors were inspired by. Cinetrii approximates the perception of movie critics more than anything else. The ranking algorithm of Cinetrii which I am continually developing also tries to skewer away from connections with intersecting production cast and crew.

With this in mind, I’ve gone ahead and batch processed the 200 most popular movies from each of the last six years (2010-2015) into Cinetrii. Those 1200 queries draw from roughly 154,000 collected online movie reviews. From the batch, I’ve sampled the 1000 strongest connections into a node graph with the help of vis.js. Click the “Connect” button to assemble the graph (mobile users and low-end laptops beware, use the imgur link instead).

What can we learn from the graph? A few movies stick out as each having a significant share of the 1000 connections. Movies such as Blade Runner, Die Hard and The Shining are prime examples of their respective genres so referencing them when assessing a contemporary genre effort makes sense. The aforementioned movies have one thing in common: they were all released in the 1980’s. Breaking down the distribution of decades in which the connections land, the 80’s comes second only to the 00’s: 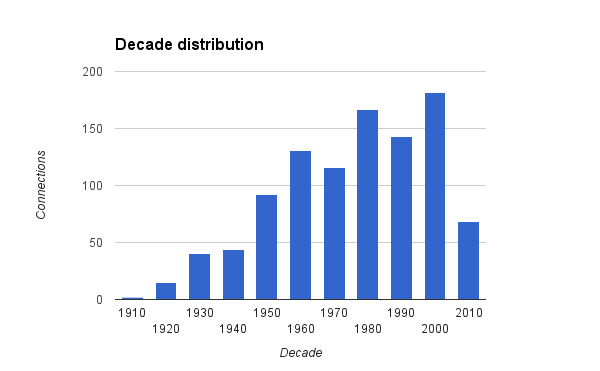 Many filmmakers and critics alike working today were “children of the 80’s”. One might expect that the frame of reference of the 80’s and onward is the reason for the connection distribution. But the 1980’s also marked a departure from the auteurist, New Hollywood of the 70’s and late 60’s. Blockbusters in the form of studio-controlled genre movies now took precedence. With today’s movie landscape of CGI-enabled science-fiction and action tentpoles, this mentality more evident than ever. That too is why comparisons to 80’s productions such as Lethal Weapon, Aliens and Back To The Future occur as frequently as they do.

Archetypal movies from other decades appear as well. William Friedkin’s The Exorcist is the undisputed benchmark for possession-based horror (the also excellent Possession by Andrzej Zulawski sees no mentions). 2001: A Space Odyssey gets brought up as sci-fi filmmaking ambitious in both scope and visuals. 70’s pictures Jaws and Rocky both inspire comparisons within their respective genres. Incidentally, they are the original blockbusters credited with killing the aforementioned New Hollywood era (along with the staggering commercial failure of Michael Cimino’s admirable, if misguided, auteurist western Heaven’s Gate).

Along the mantle of the planet-shaped graph one can find several fitting companion pieces. Enjoyed Calvary? There’s Diary of a Country Priest. If you found The Purge too high concept for its own good then Sam Peckinpah’s Straw Dogs depicts a similar scenario in a character-driven (but also somewhat objectionable) way. If the premise of The Martian interested you, then it might even be fun to check out John Sturges’ Marooned from 1969 with Gregory Peck and Gene Hackman.